Life hasn’t been kind to Harper Evans.
The small-town gossip about her dead dad and drug-addicted mother has taken its toll. But when her mother is admitted to a long-term rehab facility a few hours away, Harper sees her chance for a fresh start.
A shoebox apartment above a Chinese restaurant isn’t exactly the escape she dreamed of, but she makes it work. With limited funds and no social life, she views her new city through a dusty old pair of binoculars.
There’s no harm in looking.
Just a peek and I’ll stop.
Harper finds her new pastime quickly turning into a full-fledged obsession. She begins falling for a man she doesn’t know—has never met—as she watches him have sex through the window of his apartment. Daydreaming about what it would be like if she were one of his conquests.
We all reach a point when watching isn’t enough—when we can no longer just be a spectator in our own life. That’s when it’s supposed to get good, right? When we take control and go after what we want. But what happens when it all blows up in our face and we’re left with less than nothing?
What then?

This was definitely different than other books I have read. It was quite angsty, which I love (when I’m in the mood for that). I felt a wide range of emotions while reading this book and Jiffy Kate was able to surprise me more than once. The characters are not without their flaws, but this writing duo makes sure you love them anyway. Must read! 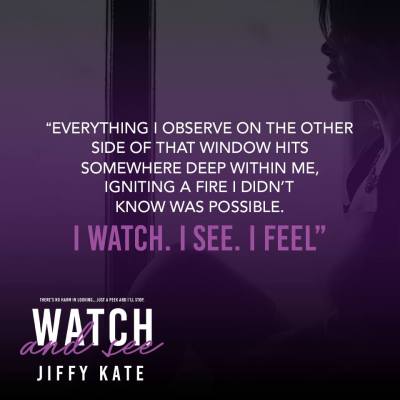 Jiffy Kate is the joint pen name for Jiff Simpson and Jenny Kate Altman. They’re co-writing besties who share a brain and a love of cute boys, good coffee, and a fun time.
Together, they’ve written over twenty stories. Their first published book, Finding Focus, was released in November 2015. Since then, they’ve continued to write what they know, which is southern settings full of swoony heroes and strong heroines.
You can find them on most social media outlets at @jiffykate, @jiffykatewrites, or @jiffsimpson and @jennykate77.